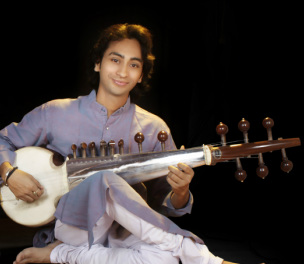 A﻿nshuman Maharaj was born in the world renowned family of tabla'Banaras Gharana' he is the son of the world famous tabla maestro Late. Pt. Prakash Maharaj and also grandson of the Late Pt. Nankhu Maharaj and maternal grandson of Late.Pt. Kishan Maharaj.He started his early life as a tabla player but at the age of 10 he decided to play Sarod from that time Anshuman continued playing Sarod and he has never seen his past.He started Sarod playing in the observation of his first teacher (Guru),Late.Shri Rajesh Chandra Moitra and he continued learning with his present teacher (Guru),Prof.Narendra Nath Dhar.
An orthodox among the traditional and optimistically fearless among the creative, Anshuman is a rare instrumentalist with an unique musical repertoire, innovative skills and the dexterity of swift, agile fingers.......In the age of 16 he gives his first performance at Divisional Railway Manager Office, Lucknow and further continued various stage performance like Ganga Mahotsav,Buddha Mahotsav,Sangeet Natak Academy,Lucknow,Raj Utsav Chhattisgarh,Doordrashan Varanasi and also abroad like Germany,France,Luxembourg,Italy,Switzerland and ets……